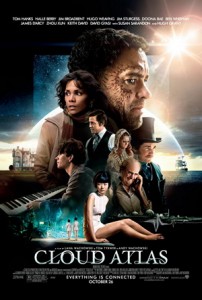 Saw Cloud Atlas this evening.  It’s difficult to say that this movie is about… but I shall attempt it.
It’s about characters in different parts of their lives and how everything is connected no matter the distance between time and space.

What else… what else… the music, the Cloud Atlas Sextet is beautiful.  It’s also filmed very well, the images look amazing.

The bad; everything else.  What is this movie about?
*SPOILERS* At the end of the movie I was left with this “message”… history repeats itself and it takes death and sacrifice to change the flow of things.  How are these notions new to us?  A simple message was beaten down, drug out until all the blood drained from its supple carcass… and then that continued for about three hours.  A short film could’ve conveyed the same message more effectively.

Why the run time of one hundred sixty four minutes?  Several different stories inter cut and interwoven together to create a tapestry of prosthetic make up and wigs.  The edits were oddly chosen, we get a scene in the nineteen seventies cut with one from eighteen ninety with little more than a verbal transition connecting the two.  The actors don’t even play the same characters reincarnated…  the editing caters to the self diagnosed ADD masses of today, for shame.

The Wachowskis are hit or miss, I love The Matrix, the first and only movie of the franchise, I enjoyed V for Vendetta, and I’m in the minority on this one, but  I enjoyed Speed Racer as well.  But Cloud Atlas manages to lose me on every front.

A rumor circling small circles that Sophia Stewart won a lawsuit for ideas she had for The Matrix, completely false, do yourself a favor and read the full story.

Overall skip Cloud Atlas.  Just cause a movie has big name actors does not necessarily make for an excellent movie.  Southland Tales had a huge cast list and was a mini reunion for SNL alumni… if the cast is your only reason for seeing a film, I shake my head at you, you’re the reason why marketing is what makes a movie, rather than the content.
My prediction is that it’ll get nominations for best adapted screenplay and best make up.

PS. don’t sit next to a stupid Asian girl who reacts at everything… we know that actors are playing multiple characters in this movie, but don’t point them out every time you recognize one of them through their make up, what is this?  A Where’s Waldo game?  When something tragic or scary happens, don’t make an audible.  If that’s how you are through life, please don’t go to Disneyland, it’ll be sensory overload and your brain might explode… on second thought, stop what you’re doing now and go to Disneyland.