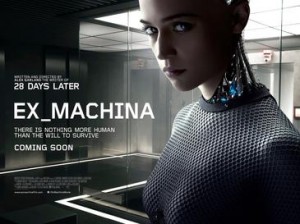 Ex Machina is about a guy who’s working on creating the most advance artificial intelligence out there. He brings in an outsider to “test” his newest creation. The film is written and directed by Alex Garland, you may know him from 28 Days Later, Sunshine and Never Let Me Go.

END_OF_DOCUMENT_TOKEN_TO_BE_REPLACED

Finally got around to seeing Chappie. After the critics panned it, and those great trailers, and the poor opening weekend, I waited and I waited, and waited…
Chappie is about a robotic police force in South Africa, but one of these robots gains sentience. Throw in a pair of rap/pop artists who play gangsters and Wolverine as the antagonist and that’s what you get.

END_OF_DOCUMENT_TOKEN_TO_BE_REPLACED 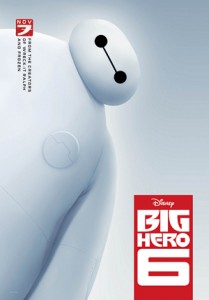 Big Hero 6 is the fifty fourth film in the Disney Animated Classics series. It’s inspired by the Marvel Comic of the same name, the film tells the story of a robotics prodigy name Hiro Hamada, who then in turn forms a superhero team to combat a masked villain, who’s responsible for Hiro’s older brother’s death. Simple enough right?

The good; the film is just fun. Disney keeps bringing the quality with the 3D computer animated realm.
Our protagonist Hiro (as voiced by Ryan Potter) has a great, yet familiar, arc as a character. He starts off reckless, then he finds purpose, then loses sight of that purpose, to then only sacrifice of himself in order to save someone else. It’s a very familiar character arc, but it works, and in this case, it works well.

The world building is something that has to be pointed out. The film takes place in the future city of San Fransokyo, the golden gate bridge has Asian inspired arcs, the signage on buildings has Asian writing (like Bladerunner), and there are these blimp like wind generators (I assume they’re wind generators) that are painted like Chinese dragons. There’s no time spent explaining where we are and how this place came to be, we’re just there, and I love it. It made me want to know how this city came about.

T.J. Miller as Fred, the comic relief, is amazing. His timing is wonderful, without being too much, especially his line about his underwear. And wait for the end of the credits for another great scene.

The story here is paramount, Hiro is relate-able and his journey in a sense is our journey. Then you have a great moment in the third act where he has to choose, it’s reminiscent of The Iron Giant and Wreck-It Ralph.

The bad; I honestly can’t put anything here. It more has to do with the film going audience… leave your crying kids at home next time please.

Overall, I had a blast. $56.2 million opening weekend? Looks like everyone else had a blast too. It truly is robot season in the cinemas right now. I challenge you not to love Baymax.
We also get an Asian character for the boy audience to connect with, gotta love it for that too.
The film has a screenplay by Robert L. Baird, Dan Gerson, Jordan Robert, and is directed by Don Hall and Chris Williams, they previously did The Emperor’s New Groove, Mulan, Meet The Robinsons and Bolt (collectively), can’t wait to see more like Big Hero 6. 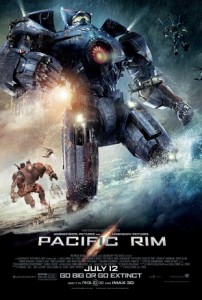 Pacific Rim is about a near future where monstrous aliens have come from the pacific ocean, and the only way to combat this threat?  Giant robots, that’s right, THE ONLY way is with giant robots.

The good; everything looks great.  The closest thing I can remember to live action giant robots is Robot Jox, and that was a hot mess of a movie.  Here we get massive machines and they’re all CG, but there’s a weight to the way they move, with every punch and step I could feel all that metal moving.  The ILM peeps did a great job.

The action is clear and in focus!  I can actually see what’s going on, it’s clear that a robot is throwing a punch and hitting a monster.  Every other movie today, please take note of how to cover action sequences here…

Hong Kong looks amazing in this movie, so much color, like a more vivid version of Blade Runner’s Los Angeles.

Not really a spoiler, but there’s a little girl in this movie (you see this from the trailer), and she is amazing.  George Lucas needs to take a page from del Toro on how to direct actors in a green screen environment.  Bravo little girl!

The bad; what bad?  If anything, I only have minor things, so here goes.

The film doesn’t feel like a del Toro movie to me, I mean yes, it does have Ron Perlman.  But there are story points that I would’ve liked to be fleshed out a little more.  I won’t go into them, they’d be spoilers for those who haven’t seen the movie.

More robots, I wanted more Jaegers fighting, they covered the action so well that it felt like a breath of fresh air and I wanted more and more.

*SEMI-SPOILER* the ending was too happy for a del Toro movie, there’s some logic reasoning that I thought of afterwards.  Mainly, why did those pilots have to die?  When in the next scene we see that there’s an ejection pod system? *END SEMI-SPOILERS*

Overall, go see this marvel in the theatre.  Cloverfield was supposed to be the new monster movie, nope, it’s Pacific Rim by far.  This film knows what it is and goes with it.  People complain that most of the action takes place at night, in the rain, or underwater… so?  Despite all of that, I can see what’s going on, the shots are in focus and on a tri-pod.  What novelty these ideas are.  I’ll take an underwater fight scene where I can clearly see everything over a Michael Bay sunset silhouetted shot that’s hand held and in extreme closeup.  As soon as Pacific Rim ended, I wanted it to start all over again!

While strolling through the WonderCon floors, we noticed some interesting versions of the Star Wars R2D2 droid that were made of aluminum and carbon fiber. We spoke with Mantium Industries and discovered what they’re up to. A representative from Mantium Industries was kind enough to discuss their building process, customization, and future projects.

While most people will stop to ask about the robots, Mantium Industries also crafts cosplay gear like swords and costumes.

“Real Steel“ is an action drama about a former boxer (Hugh Jackman) who, with the help of his estranged son (Dakota Goyo), gets one last shot at a comeback by building and training the perfect contender for the new high-tech sport of robot boxing.

If you haven’t guessed already from the trailer, the inspiration for this film is Mattel’s old Rock’em Sock’em Robots. Instead of the plastic toy counterparts, we’re treated with really cool shiny metal (“real steel”) robots. The film is set to be shown in regular conventional theatres but also be in IMAX theatres. So, IMAX viewers will be treated to high quality special FX.

Although the robo-boxing is the main draw for the film, it appears there will be a strong focus on the father-son relationship. I hope it all works out and doesn’t just become a fancy eye-FX-candy film, like the Transformers film series.

Hollywood seems to keep pulling their ideas from anything and everything. It’s interesting when they make movies from toys that don’t really have a storyline. Such as the upcoming movie, Battleship, inspired by the board game of the same name, looks to be more of a fancy action FX heavy movie than an action drama. 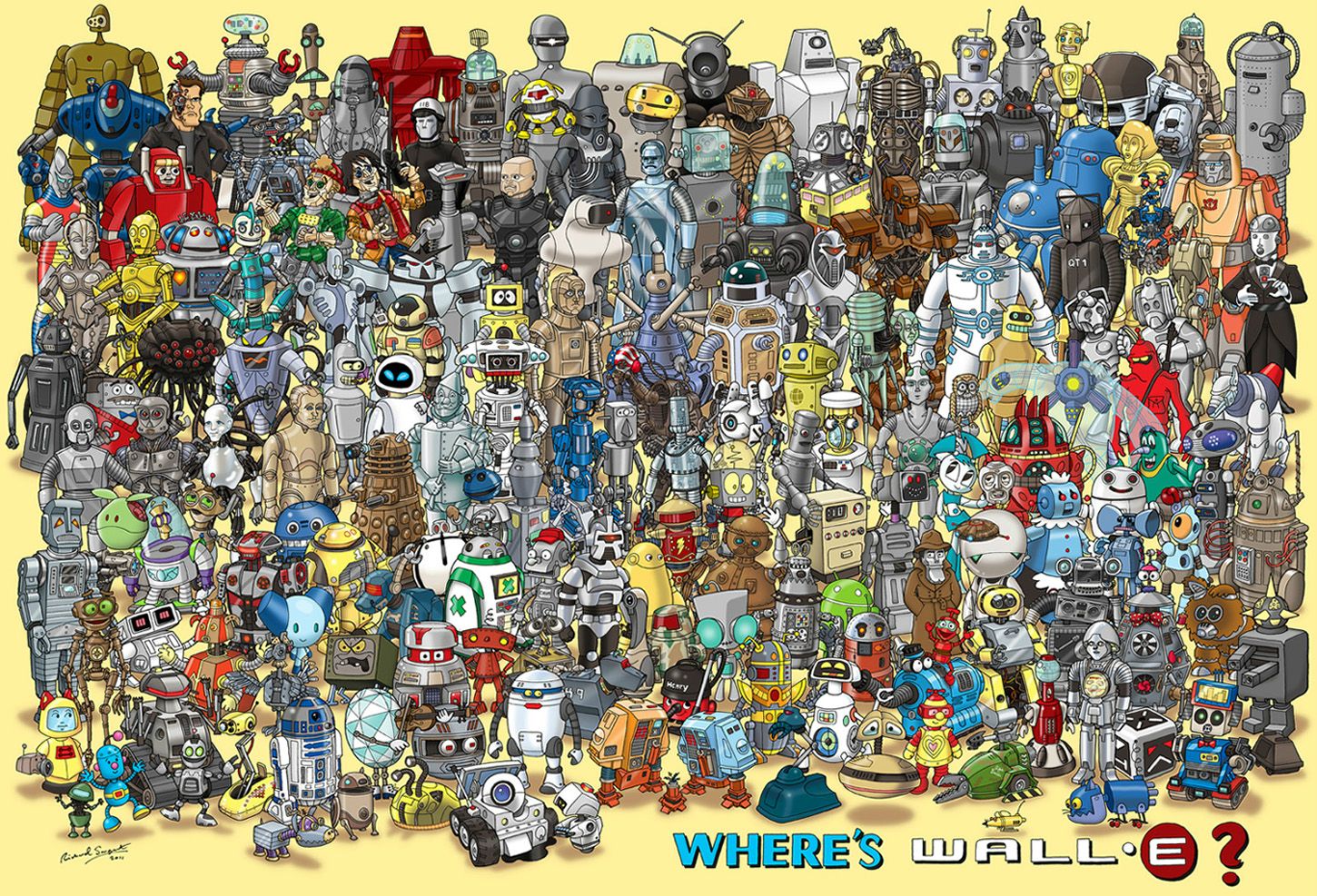