Finally got around to seeing Chappie. After the critics panned it, and those great trailers, and the poor opening weekend, I waited and I waited, and waited…
Chappie is about a robotic police force in South Africa, but one of these robots gains sentience. Throw in a pair of rap/pop artists who play gangsters and Wolverine as the antagonist and that’s what you get.

END_OF_DOCUMENT_TOKEN_TO_BE_REPLACED 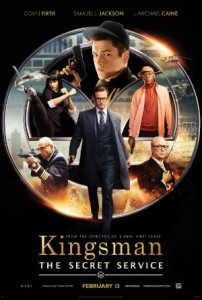 Kingsman: The Secret Service is about a super secret spy group comprised of gentleman whose codenames are that of the Knights of the Roundtable. They’re on a mission to stop Samuel L. Jackson as he lisps his way to mass genocide, throw in slick action sequences and over the top violence with an underdog recruit, and that’s what we have here.

The good; the movie is just fun, it knows what it is and goes with it, meaning, it self references itself and almost winks at the audience. From the opening credits, you know what you’re getting.
The movie is rated R and it really earned a hard R rating. But back to being fun, it’s everything we’ve grown to know about Mark Millar (who wrote the graphic novel the film is based on), he takes a teenage boys’ angst and cathartically channels it through media. Gary “Eggsy” Unwin is recruited by agent Harry Hart to be a Kingsman, Eggsy is the typical teenage male with a chip on his shoulder, but through this training he learns to shot guns and kill the bad guys, what boy doesn’t want that??

Eggsy is played by Taron Egerton, and he does a great job carrying this movie. I’ve never seen Egerton in anything else, to me he’s an unknown, Matthew Vaughn took a gamble casting him in the lead role for this movie, and it paid off.

Harry Hart is played by Colin Firth, a job well done playing the gentleman spy/agent/killer. Mark Strong as a mentor is a nice change of pace, really compliments the who group.

The bad; other than Mark Millar’s creative works being made by the devil spawn that is 20th century fox international distribution management…
There were some bad effects shots. They probably had to trim the budget in certain areas, but it was the small stuff that stuck out. Put aside the over the top violence, I’m talking stuff that you don’t normally take a second glance at, but when done hap-hazardly sticks out. The example that comes to mind is the brick wall in the elevator in to the secret chamber, obvious green screen. And some of the shots when the private plane lands in the mountain headquarters… just odd.

*SPOILERS* Oh and there’s a thing that happens with President Obama in this movie that felt… wrong. I get it that all the world leaders are in on the devious plot, but we should’ve seen some of the others suffering from the same fate. It just didn’t sit with me very well, hahaha, I guess I am patriotic. *END SPOILERS*

I haven’t read the source material, but I was hoping that the movie would be about a group of gentleman secret agents fighting the bad guys in tailored suits, oh well.

Overall, very fun, there hasn’t been a fun secret agent movie in a while. Kingsman does a great job in being meta and calling out that “this isn’t that type of movie,” where villains spout off their entire plan while they have the hero captured. The casting is brilliant. The action is sublime. The suits are tailored.
Oh and there’s a scene at a Kentucky church where things go extremely wrong and agent Hart is in the middle of it, he does something very irredeemable and pays the price. It’s shocking but yet justified, bravo for that.

Kingsman: The Secret Service is a cover to a song we all know, but it’s a great cover. I saw 47 Ronin, it’s an adaptation of a Japanese tale where 47 samurai avenge their master’s death.  It’s about honor, loyalty, and duty.  Throw in an American sensibility with slick computer graphics, and you get this latest film adaptation.

The good; the action is nice, it sucks that these days, those of us who are old enough, Keanu Reaves always gets compared to The Matrix.  But the action is well done, we get medium and wide shots, not all of it is shakey-cam close ups.  I really appreciate that.

Hiroyuki Sanada usually plays a tough as nails jerk, but here he’s actually a good guy.  He plays Oishi, the default leader of the forty seven ronin.  His stoic devotion is very well delivered.
Continuing on with the acting, we also get treated to Kō Shibasaki as the love interest.  Good to see her in stuff, you may remember her from Battle Royale.

Considering this film is for the average American going audience, the film does a good job with letting us inside eighteenth century Japanese culture.  The cultural rules are set up, the reason for the disgrace, and the reason for loyalty is all done fairly well.  At no point did I feel that there was a large leap in logic taken.

The bad; the character that Keanu Reaves plays is made up, there was no half-breed amongst the forty seven ronin.  I understand why they created this character, but like The Last Samurai, where Tom Cruise is the titular Last Samurai, why are these historical inaccuracies allowed?  It feels somewhat disrespectful to the source material.

This story has endured throughout Japanese culture for a reason, it’s compelling and awesome, why can’t the filmmakers rely on those aspects to sell the story?  Why must they insert something fictional for us to relate to?  I didn’t mind the magical/fantasy aspect, but comeon.

Overall, not as bad as I thought it would be, and I did enjoy the action sequences as well as the fantasy bits that were thrown in.  If you know nothing about the original story, you should be fine viewing this movie, but sometimes one can be too smart for ones’ own good.  Luckily I was able to still enjoy the bulk of the movie.

On another note, there were a lot of people in the theatre for this film… and the audience was very varied, mostly stupid though.  Hearing their comments was like listening to first graders who aren’t able to connect the story threads of See Spot Run.  It’s really hard to enjoy a movie in a theatre these days… shame.

While The Hunger Games plows through with a force at the box office, being the number one movie three weekends in a row, I opted out for something that was more… on the non-thinking side.  I saw Lockout this weekend.

The short of it, we’re in the future, technology is amazing and criminals are sent to a prison in space where they’re put in stasis.  There could be some effects, so the President’s daughter (Maggie Grace) has a bleeding heart for them and wants to see the effects if any.  While taking a visit to the prison the inmates break out and take over.  The government calls in Snow (Guy Pearce) to run a one man rescue operation.  Queue the whacky-ness and explosions – go!

The good; it’s Guy Pearce, haven’t seen him in a lead role in a while.  I mean, he’s in things, but briefly.  Let’s see if you’ve spotted him in these movies; The King’s Speech, The Road, Bedtime Stories and The Hurt Locker. So Lockout is a departure from his usual dramatic roles, it’s nice to see him in the wise-cracking, gun-toting anti-hero.  The opening scene with him over the credits was very amusing.

The embracing of the cheesy over-the-top quality, this movie knows what it is and goes with it, at no point did I get the feeling that it was taking itself too seriously.  And for that I applaud.  One moment in particular is a very CG chase scene, the whole sequence is overly CG and when Snow slides off his vehicle on to oncoming danger, the blending works out, I know Snow is real while the background isn’t, but considering everything else looks that way, it just felt normal.  Unlike a overly CG shot placed in to a movie to cover something up, which throws me out.

Luc Besson‘s name is attached toLockout,for that fact alone I have faith that this movie will be entertaining, at the least.  And I certainly was not disappointed.

The bad; Guy Pearce, why is he doing this movie?  Is this a stepping stone for his next bigger movie?  Did he owe someone a favor?  Or is he doing someone a favor in order to do his next movie?  Just seems very unlike him and it took me a while to accept it.

Very cliched set ups, you could see them going where they were going a mile off.  I would’ve liked a twist or a variation on a theme with these set ups, something to spice it up.

There’s one moment in the beginning where Snow is running away and sees his getaway future getaway vehicle.  But the shot and the production design had us focus on a patch job on the wall behind the vehicle, that was confusing and sorta distracting.

Another thing I have a slight problem with was the ending, they threw in too many twists here, I won’t go in to it for fear of spoilers.  But they used the Tony Scott patented editing style, but not on crack just caffeine, which at this point in the movie was ok for a moment, but not as long as they dragged out that editing style.  Then the twist where that thing they were looking for wasn’t there, but in plain sight the whole time.  A more straight forward ending would’ve been more satisfying.

Overall, I checked my brain at the door and had some high orbiting popcorn munching explosion filled goodness.  This movie was just a lot of fun, and it could possibly be improved by having a running audio commentary while watching with friends.