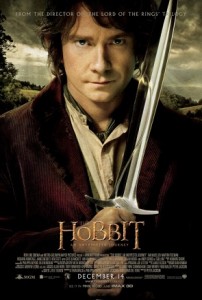 I saw The Hobbit: An Unexpected Journey this weekend.  Is it me?  Or is the Sherman Oaks Arclight degrading?  The audience there as of late has become that of a dollar theatre.
Back to the movie, it’s the first in a prequel trilogy to that of Lord of the Rings.  We follow a young Bilbo Baggins as he embarks on a journey through Middle-Earth.  A Dwarf King is seeking to reclaim his rightful mountain kingdom from a dragon that’s occupying it now, he needs help, and that’s where Bilbo joins their merry gang.  We also get to see some familiar faces along the way.

The good;  the score, I love Howard Shore’s music.  Its swelling grandeur really compliments those wide shots.  This is the exception where a prequel actually worked for me.  We’re again brought in to the world of Middle-Earth, a time and place where not much changes in terms of technology.  So I’m ok with this, it’s not like a sci-fi prequel, where the technology of the world is far better in the past than it is in the future.
Speaking of music, there’s singing in this movie!  I actually wanted more songs.

Martin Freeman is great as the young Bilbo.

The bad; there are certain scenes where there’s too much going on, the frames are just too busy, one example that comes to mind is the mining caves.
I realize that the work of literature, The Hobbit, story, where it is one.  It felt more epic, when it wasn’t, it’s a very straight forward story without any twists or turns.

Overall, I enjoyed An Unexpected Journey,  it was delightful seeing the shire again, as well as some familiar faces of Middle-Earth.  I’m now curious to see it in forty eight frames 3D.  The scene with Gollum is amazing, the emotions that they get out of his computer generated face was frighteningly real and… well emotive.  It was a treat seeing that scene filmed live action, we all know the scene from the Bass/Rankin The Hobbit.
Still uncertain why this is a trilogy, but my butt will be in the theatres.