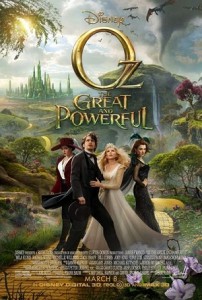 I saw Oz The Great and Powerful this weekend.  In the vein of the musical Wicked, this film is a prequel to the adventures we have with Dorothy.  It’s how Oz became the wizard of Oz.  If you don’t know what I’m talking about, you should.

The good; I love the opening sequence, it’s in 4×3 black and white.  We’re treated to this retro/turn of the century… well, slide show thing.  It’s this old timey puppet show music box thing, just a delight to see.  Then the black and white continues with the live action, not until we “leave Kansas” do we get the full widescreen as well as color.  I really enjoyed that bit.

Like with any prequel, we come in to the story knowing a little about the characters.  So it’s nice to see nods to what we know appear.  A couple of them (which aren’t spoilers) are Oscar Diggs (Franco) going by Oz and being a magician.  He also meets a former flame, who’s visiting to let him know that she’s marrying a John Gale, it’s Dorothy’s family.  I love stuff like that.

Once we get in to the land of Oz the film takes a different look, granted we have color and are utilizing the whole screen now, but it feels more like Tim Burton’s Alice in Wonderland.  Lots of visual effects to take in.

And then we have Rachel Weisz, she looked great.

The bad; I wasn’t too thrilled with some of the make-up *SPOILER* Mila Kunis turns in to the “traditional evil Witch” that we know as the villain from the Oz story.  I just felt she wasn’t up to pare for that role. *END SPOILER*

Overall I enjoyed the movie, I’m not the biggest fan of James Franco, but he managed to do all right, it didn’t help that Kunis wasn’t working for me.  The 3D was a blend of the “viewing in” aspect of Avatar, but also had enough “gimicky” qualities of traditonal 3D where things flew out at you.  Definitely kept me invested, and it made $80 million this weekend, so I wasn’t the only one.