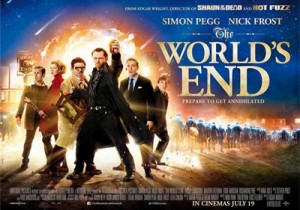 Finally got to see The World’s End this weekend. It’s about old friend reuniting to finish a pub crawl from their youth, but little do they know that their hometown has changed… (dun dun dunnnn).

The good; Edgar Wright reunited with Simon Pegg and Nick Frost (among others) for the third installment in the unofficial “cornetto” trilogy.  The three aforementioned  individuals, along with the frozen dessert, being the connective tissue.  I’ve been anticipating what the third movie would be for some time, and here we get it, like seeing some old friends.

The acting is great, I love the chemistry between everyone, it looked like a lot of fun to be on set.  The humor also seems to come along very organically.  The dialog had me laughing out loud, here’s an excerpt, “A man of your legendary prowess drinking f**king rain! It’s like a lion eating houmous.”

The pacing is very spot on, it starts off as a “bringing the team back together” type of movie and then once they’re together it’s an awkward family reunion sort of thing, then once things get going it’s an end of the world survival movie.  The movie just doesn’t let up, the transitions between the moods of the movie are woven in beautifully.  Lately movies have not been blending their scenes, this could be an editing issue, but with The World’s End the writing has to be credited here.
The story moves along with what the characters are going through, so these seemingly different movies can meld in to one and I don’t mind it.

The bad; no one’s seeing this movie?  Could this be attributed to the whole Firefly – Serenity thing?  Where the film was screened for the audience that would pay to see the movie anyway?
This could also be because of the R rating, scaring people from theatre seats.

Overall the wait was worth it.  I enjoyed every minute of this film.  Wright and Pegg manage to pen another script that’s ripe with characters and extreme circumstances, yet allowing it to be relate-able and endearing.  I find it odd, yet refreshing, that I’m able to sympathize with situations and motivations in Shaun of the Dead, Hot Fuzz, and now The World’s End.  Probably the best movie of the summer that no one is watching.