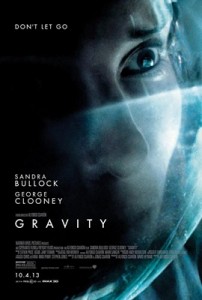 Waited to see Gravity, worth the wait.  This is a movie truly worth seeing in IMAX 3D.  See it that way and see it often, well maybe not often cause it’s already made $50 million on its opening weekend.

The short of it, astronauts on a routine expedition get caught in a debris storm that leaves them stranded in space, dun dun dunnnnn…

The good; the visuals are amazing. the opening shot goes on for what feels like forty five minutes.  Technically stunning.  This is how filming a mostly CG film is supposed to be, not like those Star Wars prequels.

The only two on screen actors you have are Sandra Bullock, who plays the bio-medical engineer Ryan Stone, and George Clooney, who plays veteran astronaut Matt Kowalski.  Other than that, everyone else is a voice over.  It’s compelling that all you have on screen are these two actors and you’re still right there with them.

The soundtrack is amazing, very driving and atmospheric, pun intended.  With a film like this where they do portray space as the vacuum it is, there’s no sound, leaving a lot of room for the soundtrack.  It’s booming, almost deafening, and yet can be triumphant and moody.

Gravity leans more to the scientific aspects of what would happen in a space disaster.  Reminiscent of movies like; The Perfect Storm, Open Water, Castaway, and 2001: A Space Odyssey.  In its leaning to the hard science stuff, the film uses imagery from 2001, but doesn’t attempt to touch the philosophy aspects of it.  An example is the shot where Bullock is curled up in the fetal position while in zero gravity, the tether line is the umbilical cord and the craft is the womb…  I like the nod to 2001.

The bad; you should see this in IMAX 3D, there’s no way about it, seeing this film in regular 2D isn’t worth it.  Allow yourself to be immersed completely in a movie.
The trailer… it portrays the film as more high octane action by using sound effects in space, the marketing is mis-leading here.  Those morons expecting a big explode-y type movie shouldn’t be watching this film, so why market to those cavemen?

There isn’t much to put here, but I’ve got to put something.  If anything, the story is nothing new.  But it’s so well done.

Overall, Gravity is one of my favorite movies this year.  It should be nominated for best picture as well as all the technical nominations that it’s eligible for.  This is basically a disaster film but set in space, it’s man against the elements, in this case the lack of elements.  It’s another technical feat brought to us by Alfonso Cuarón.  Bravo!