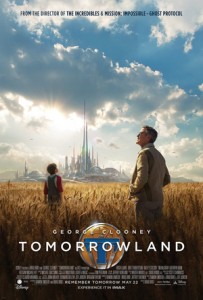 Tomorrowland is about a place that only a select few are allowed to go to, Frank Walker (George Clooney) went and was kicked out, now Casey Newton (Britt Robertson) gets her chance to go there. In Tomorrowland, events affect our world and vice-versa, but as to the extent… that’s up to our main characters. The film is co-written and directed by Brad Bird.

The good; the visuals are stunning. When Casey (Robertson) touches the pin she’s instantly transported to another world. Night becomes day, grass becomes concrete… the transition happens with a snap of the finger and I thoroughly believe that we’re in another world. There are a lot of long one shot take here too, and they really showcase the world that we’re in. Normally I wouldn’t call out a long one shot in a computer generate environment, but in Tomorrowland it’s used to greater effect in allowing us to take in the grandeur and spectacle that we’ve been transported to another world. There’s logic and function to what’s going on around us, and the way they hid the edits is very clever, one moment we’re walking down a gangway then a rocket blasts off into space, the camera tracks with all the action and serves as our eyes.

The child/young actors are great here. Raffey Cassidy as the recruiter Athena is brilliant. It’s awesome to see her with Thomas Robinson (playing the young Clooney). They hold their own against Hugh Laurie and Clooney.

What I really enjoyed most is the message of hope, sure Frank is disillusioned and bitter towards them, but when Casey comes along she sparks hope into him and we’re taken along for the ride.

Oh, and I have to mention the score by Michael Giacchino. I love the epicness of the music and it fits

The bad; the trailers don’t really sell this movie quite properly. The first trailer did it the best, it wasn’t about story, it advertised more of a feeling.
I wish we could’ve spent more time in Tomorrowland, I wanted to get there and have the adventure in that world.

People aren’t seeing this movie, do they always want doom and gloom in a Dark Knighty sorta way? I can’t believe Tomorrowland has been dubbed a box office failure…

Overall, I really enjoyed this film. Brad Bird does a great job in getting marvelous performances from these younger actors. Britt Robertson paired with Clooney works, they’re an odd coupling which provides opposing views of the same goal.
I also have to mention the Eiffel Tower scene, there’s something about putting all historical inventors together that speaks to the conspiracy geek in me. But what I loved most about Tomorrowland, is the old school Disney movie feel to it, reminded me a lot of the movies I grew up with where the kid gets introduced to a “special world” (Gremlins, The NeverEnding Story, Explorers, Labyrinth, The Monster Squad…)  and it’s ultimate message of hope. In this post 911 world, hope is a rare commodity.