Spider-Man: Homecoming is the latest Spider-Man movie, this time it’s directed by Jon Watts with a screenplay by Jonathan Goldstein and Francis Daley, Watts and Christopher Ford, and Chris McKenna and Erik Sommers. The film stars Tom Holland (reprising his role from Captain America: Civil War), Michael Keaton, Jon Favreau, Zendaya, Donald Glover, Tyne Daly, Maris Tomei and Robert Downey Jr.
This time around Peter Parker tries to balance his life as a superhero, high school, and a new villain in the form of the Vulture. END_OF_DOCUMENT_TOKEN_TO_BE_REPLACED 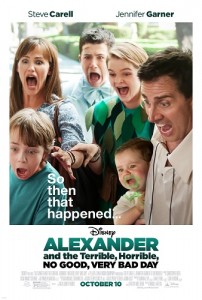 Alexander and the Terrible, Horrible, No Good, Very Bad Day is about Alexander and his family. They all seem like they have it all together and pay no mind to the woes of Alexander, but soon they’ll get a taste of things not going their way. This family comedy stars Steve Carell, Jennifer Garner, Ed Exenbould (Alexander), Dylan Minnette, Kerris Dorsey, Bella Thorne, Megan Mullally, Donald Glover, and Dick Van Dyke.

The good; Ed Exenbould is pretty good for a kid actor. It helped that the movie had an ensemble cast, but he did an excellent job. This film is just family fun and you got that feeling from everyone on screen. Steve Carell was able to do his yelling that we all love, but it wasn’t too much and it didn’t call out to itself, then you have Jennifer Garner who could’ve taken center stage, but she didn’t. The story lines of each family member kept me interested by contributing the right amount of time and then moving on to the next one.

At the core of this movie, it’s about family and that’s what really drove the motivations of the characters. The wackyness of a terrible day where nothing can go right was amusing and didn’t cross over in to the realm of unbelievable.

The bad; no one’s going to see this film, when they should. In a time of darkness and broody-ness Alexander comes as a nice breath of the flip side of a coin (I know I’m mixing metaphors). People’s closemindedness, that’s what causes people to miss good movies sometimes.

Overall, I had a great time. Alexander comes as a pleasant surprise in a world where so much is going wrong. The take away is that family is paramount and that’s what really kept me invested. So do yourself a favor and go see this film, and remember what it was like to be a kid wanting to be heard.