The Green Lantern: The Animated Series debuted this weekend.  For those who are unfamiliar with the Tales of the Green Lantern, here’s a short snap shot – fearless test pilot Hal Jordan is chosen by the ring of a dying Green Lantern to be the first human inducted in to the Green Lantern Corps.  The Corps is comprised of beings throughout the universe that are chosen because they have the ability to overcome great fear.  They maintain order in their sector of the galaxy, in short, intergalactic cops.  The Guardians of the Universe are their “bosses” who are the oldest beings in creation, and have designed the GL Ring to be the most powerful weapon in the universe.  It allows its bearer to create anything that their mind can will in to existence.

Here’s the short of what happened in the hour long pilot episode; Hal (voiced by Josh keaton) is testing a jet for Ferris Aircraft when an earthquake happens, he loses the jet to save a train.  Carol Ferris gets mad at him, he promises to make it up to her with a dinner date, but then his ring calls him to OA.  Hal transforms in to Green Lantern and is space bound.  He’s being reprimanded by the Guardian council when a GL Ring flies in, it’s the ring of a now dead Frontier Lantern.  Who are they?  The Guardians give a quick explanation and dismiss the hearing.  Ganthet shows Kilowog (voiced by Kevin Michael Richardson) and Hal this experimental spaceship that’s got artificial intelligence and a power battery.  Hal and Kilowog then “borrow” the ship and go in search of what killed the Frontier Lantern.

They discover that there are Red Lanterns and they combat them while saving Shyir Rev (voiced by Kurtwood Smith), another Frontier Lantern, from certain death.  Returning the wounded Shyir to his home planet they’ve accidentally led the Red Lanterns to this peaceful colony planet.  The Red Lantern leader, Atrocitus (voiced by Jonathan Adams), sends down a probe that will destroy the planet unless the inhabitants hand of the Green Lanterns.  A valiant fight is fought that ends with *SPOILER* Shyir’s death and Kilowog saving the inhabitants.

The AI ship along piloted by Hal and Kilowog have a captured Red Lantern named Razer.  They set out to find more Red Lanterns in the cosmos.

The good; the fight scenes were great, once they started going.  This being mainly a kids’ cartoon, it got a lot more violent that I thought it would.  Much like The Clone Wars of late, so that was surprisingly unexpected.  The sound effects are great and the use of constructs really complimented the excellent sound.  Having Kurtwood Smith voice a GL was a nice treat, almost casting against type for me, but it worked.

Shyir’s death caught me by complete surprise, I mean – it’s a cartoon for kids, they would find a way out, but nope, they didn’t.  And what’s more, they brought in Kilowog’s backstory, which you’d only know from reading the comics.  That was a great emotional moment coupled with a nod to the comics, wonderful.

The action – once the fighting and combat started, they had some nice sequences.

The bad; Hal goes in to space way too quickly, and it seems like the whole series will be space bound.  Which I’m not too keen on.  The whole relate-ability to a character will be gone.  It should be about Hal trying to balance his day job with his romantic interest in Carol coupled with space emergencies and Coast City dangers.

This is just the pilot episode, but it looks like we’re losing the who secret identity thing, which to me is a kid’s fantasy, to be completely passed as having no impact in anything, while actually saving the world.  With the Green Lantern you not only have that but you also have the will to create anything you can imagine, which is essential for growing kids where they play in their imagination almost everyday.

From a production standpoint I see why they went in to space though, space is easy to animate, and when they land in a “combat zone” it’s usually rocks and desert like.  For some reason the animation still looked flat to me, overly simple and not detailed.  Which makes me think that Hal will spend all his time as GL in space fights.

One more thing, and this is way too nitpicky, but they really really simplified Hal’s hair.  Much like Superman, Hal has a certain hair style.  Which makes me think that they’re going for a medium between the comics and Ryan Reynolds…

Overall, I will have to give this a couple more episodes before an official verdict is rendered.  But for now, I’m leaning toward passing on this series.  It needs to decide what it wants to be.  Go all the way like Justice League Unlimited with the serious aspects or go for tongue and cheek the way of Batman: The Brave and The Bold. 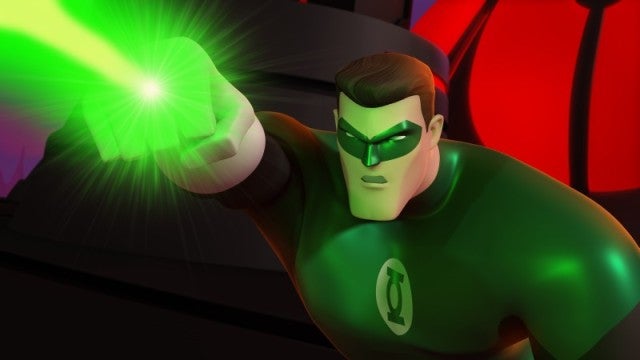 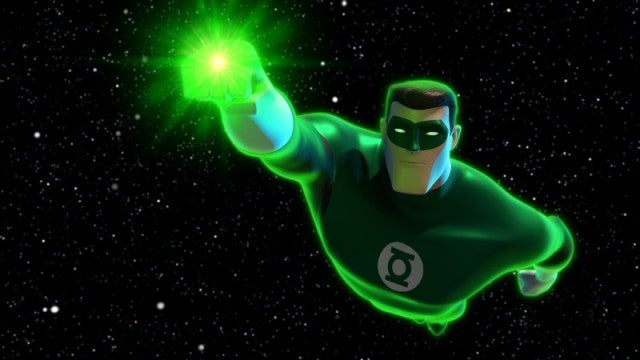