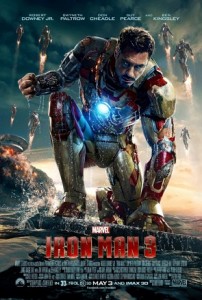 Finally got to see Iron Man 3, it’s the third installment in to the Iron Man franchise, this film being directed and written by Shane Black. I’m a Shane Black fan, he’s done; the Lethal Weapon movies, Kiss, Kiss, Bang, Bang, The Last Boyscout…
In short, the third movie is about Tony Stark battling a new villain as well as personal demons.

The good; Robert Downey Jr, he carries this movie completely and thoroughly. His comedy timing and delivery is great, there’s some scenes in particular with a kid, but I won’t get in to it.

The scene where Iron Man has to rescue passengers suddenly ejected from a plane is great. There’s a real sense of geography and urgency amidst this chaotic situation and it’s pulled off very well.

The bad; it wasn’t the movie I had hoped for, not typical of Shane Black’s previous work. The twists and turns aren’t hard to spot, and much like The Dark Knight Rises, there isn’t much of Iron Man in this film. It seemed that there was too much to service in the story, you have the Extremis stuff as well as the Mandarin.

Overall, enjoyed it better than the second movie, but the first movie is still the best one out of the trilogy.
Again… wait till the end of the credits (as you should) for a tag at the end.