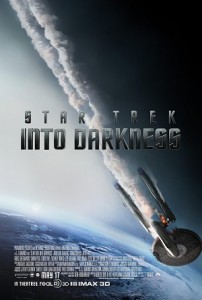 I saw Star Trek Into Darkness, it’s the direct sequel to the rebooted Star Trek universe. The short of it is the crew on board the Enterprise goes on spacey missions and does spacey stuff, we all know what Star Trek is.

The good; everyone’s back, I liked what the young cast brought to the table and I’m glad they’re all back.

The first half of the movie.

Benedict Cumberbatch carried the most presence with what he had to work with.

The shirts, the shirts are just well pressed!

The bad; how can I put all that feel here? I won’t try, but I’ll hit on some important things.

This movie is not Star Trek, I blame the “writers” Orci, Kurtzman, and that ever wonderful Lindelof. Collectively this team butchered Transformers, Cowboys and Aliens, the Alien franchise, and now Star Trek…
The first half of the film was great, it was attempting to correct the things that were sorely wrong with the first movie. Scotty is telling Kirk that they’re explorers and not a military vessel, so he resigns… thinking back on this, that was all Simon Pegg, cause he knows, where those other guys clearly don’t know Trek.

*SPOILERS* Star Trek is about hope and bettering humanity, I get it, 9/11 happened, but does Star Trek need to remind us of that? Also, if you’re going to create a new world for Star Trek, and close the old one off, why are we rehashing the “old world’s” stories? They tried it within world with Nemesis, and that ended all the Next Generation films, “hello McFly” are we not learning from history?

Why Khan? I get it, that’s the best movie from the franchise, and you’re a fan, that doesn’t mean you should make Wrath of Khan over again now does it?

Why is Carol Marcus in this film? Just cause she was in Wrath of Khan? Then we reverse the whole Spock death by putting Kirk in radiation? There were more than a few scoffs in our audience when that scene came up. This new Trek hasn’t earned that moment.

And at one point Spock goes and talks to Spock Prime… that’s lazy story telling, cause Spock can just ask Spock how it all happened in the “old” universe, really?

Overall I fail to see how a Star Trek fan can like this movie, it’s all flash and no substance, literally, flashes of lens flare galore. The future in Star Trek is bright, but not literally bright. Into Darkness lost me as soon as Khan’s name was revealed, from that moment on I was beamed away. See what I did there?

Save your time and watch some real Star Trek. *END SPOILERS*