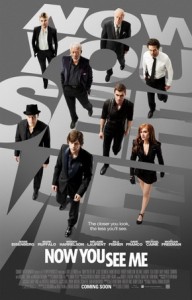 The good; I was immediately hooked in by… well the hook, we’re introduced to the magicians in their current state, from street performances, to former headliners, to con artists… it was a great set up for these characters cause it showed how different they are with their talents.

The movie has a very polished slick look, this is one film where the camera movements and quick cuts serve the story.  It shows that the magicians are faster and one step ahead.

The cast did a great job, and boy what a cast it was; Morgan Freeman, Michael Caine, Woody Harrelson, Jesse Eisenberg, Isla Fisher, Dave Franco, Mark Ruffalo, and Melanie Laurent.

The bad; who’s the main character?  We’re introduced to the four magicians, after they perform a bank heist as part of their act they’re then taken in to custody and question, we then meet the FBI agent (Ruffalo) in charge, but he’s not the main character… so there’s a lack of main focus, but not really a bad thing here, just noticed it.

With magic or illusions of any kind, I was expecting more practical effects, especially if they’re a Las Vegas act, cause that stuff is perform before a live audience.  But there was a lot of CGI use, some shots made me question if that was needed.

*SPOILERS* The first two acts are great, we get to see these guys work and fool people and there’s this sci-fi element thrown in there.  Then Morgan Freeman introduces us to this notion of “The Eye,” which is a secret magic club thing from long long ago.  The third act then wraps everything too neatly and easily.
I would’ve liked more set up to what they were paying off at the end.
And if you don’t see the twist coming… come on.  Please keep your befuddled gasps to yourself, otherwise you’re cluing us in to how stupid you are. *END SPOILERS*

Overall – I really enjoyed this heist movie, it was fun, and I’m so glad it beat out After Earth (no one needs another M. Night Shyamalan movie, let alone a Jaden Smith movie… urgh).
Now You See Me is a heist movie with some fantastical elements thrown in.