Remember when 4G was such a buzzword that carriers decided they could interpret the meaning however they felt most marketable given their network abilities? The meaning boiled down to the same essential idea: get apps and multimedia faster onto your phone and post pics to social networks instantly to better serve your audience. The dream was users would have the same mobile experience away from their ample home Wi-Fi connection.

It’s been years and I think it’s safe to say 4G is mature and undeniably better than Wi-Fi in many cases. There are even areas where a mobile connection can easily surpass available residential isp service rates. So why do some apps still insist on Wi-Fi for specific functions ? 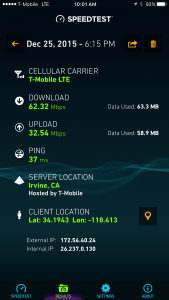 32.54mbps upload …. Yup. That’s better than my time warner home connection that maxes out at 20mbps. It should but noted that carriers don’t guarantee speeds like the above for 100 percent of their covered areas. If you’ve ever been inside a dense sports arena, you’ll know that bandwidth is definitely a shared resource.

The problem is this…. 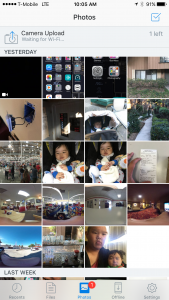 Waiting for Wi-Fi?!? Why? The file is only 7.7MB , yet Dropbox decided I need Wi-Fi to upload this file because it’s a video. 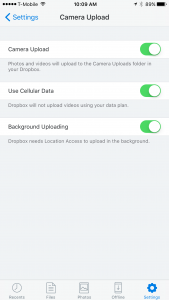 The wording suggests that Dropbox is concerned you might be gobbling up all your data allowance if you’re on a limited data plan. But what’s the point when you could be easily upload tons of pics that far exceed the size of one video? Is it that Dropbox thinks your connection isn’t reliable enough? If you do the math (7.7MB /(35mbps /8)), it would only take about 2 seconds to upload this video.

Apple is another offender when it comes to outdated upload rules 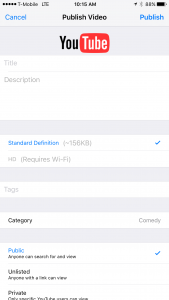 It’s pretty annoying that you have to wait to get to a Wi-Fi connection to upload a video. 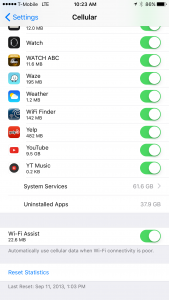 Let’s look at another scenario that illustrates how pointless Wi-Fi requirement is. T-Mobile and AT&T (and probably other carriers) lets users install a cell spot in their homes to enhance coverage by leveraging home internet connections. So if I’m at home, I couldn’t just use my cell spot to upload video since Dropbox and iOS’s YouTube extension require Wi-Fi but you’d actually be on the same exact connection just using a different wireless technology. It’s absurd and app makers need to just one option for users: allow cellular data uploads or don’t. No limits for video. 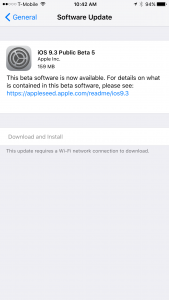