Television series have a double edged sword when it comes to character development: every episode presents the opportunity/challenge of developing a character. Remind the viewers why they love OR hate a character and they’ll keep coming back.

I’m barely finishing Season 1 of AMC’s Mad Men and am having trouble thinking of another male lead in television that I’ve been so attracted to. A lot of guys would suggest Jack Bauer (from Fox’s 24 series) as the ideal male character to vicariously live through. Bauer represents many of the adolescent fantasies one could conjure up: firing guns, pounding faces with our bare hands, and making things explode all for the sake of protecting the United States. Although Don Draper doesn’t have as many action scenes as Bauer, they both are a vessel for a multitude of issues and inner demons. Here’s a list of qualities for Don Draper, that I’ve become rather infatuated with. 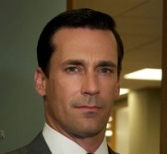 Mad Men takes place in the 60’s. If there ever was an era that produced respectable fashion that stands the test of time, it’s the 60’s. Guys just look like such gentlemen with their skinny neckties/bows, perfectly cut, pressed suits, plastic/horn-rimmed glasses. Compared to the rest of the male cast on Mad Men, Draper, in particular, grabs your attention. Is it just a coincidence he also has the nicest hair in the show?

Jon Hamm, who plays Don Draper, has hit the big 40, but I could definitely see him as a great candidate for Superman. If there ever was a modern advertisement for cigarettes, this show would be it. At times, I think the show should include a warning that cigarette addiction can occur from watching it. One time, I had a moment where I was holding a screw in my hand and caught myself holding it between two fingers like a cigarette.

Most importantly, the show has redefined how I measure success: if I don’t have a stack of fresh shirts in my desk drawer, I have not made it.

Who couldn’t use a little more pull? Professionally, he’s THE guy who’s opinion matters the most. In any meeting, there could be 10 other guys chiming in with advertising thoughts on how to sell a product, but in the end, it’s Draper’s opinion that hooks the client. His ability to seduce initially unimpressed prospective clients never fails to be fascinating. Beg to differ? Opposing his opinion most certainly makes you an enemy (Pete Campbell). The key to his power is also the fact he almost never feels threatened. Control is everything

If I’m being honest with myself, I think my the biggest draw of Don Draper is how much of a mess he is and we all know everyone loves looking at a train wreck. Draper represents the American dream of rags to riches formula with a generous pinch of self-destructive crazy. Let’s review what we know of him so far:

Don Draper is clearly a sex addict. He demonstrates how married men can have their cake and eat it too. Any pretty women that crosses his path are not safe from his charm and insatiable appetite for sex. Even after he’s done gallivanting during office hours, he’s still the man of the house at home.

If you were to look at the cast without seeing an episode you’d probably go “Wow. He’s married to January Jones! What a lucky guy. How could he possibly want to cheat on her?”. Well… Just watch the show, you’ll see how. Having sex with women appears to be as addictive to Draper as the cigarettes he smokes. If you haven’t figured out how Don Draper’s mind works when it comes to women, here’s the formula: if he finds you attractive, he WILL have sex with you.