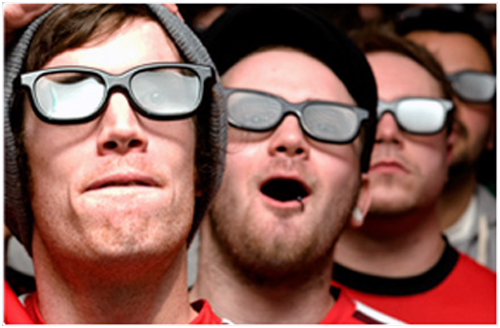 3D is controversial. It either makes everything 2D look flat or causes frustration when buying tickets a theater and the promise of bringing greater immersion into the living room is seeing slow adoption for several reasons.

People already invested in HDTV’s they aren’t willing to replace until they no longer work. If the FCC required all programming to be broadcast in 3D, we’d have a different story. This is what happened in 2009 when most stations stopped transmitting NTSC (analog SDTV) and began/resumed broadcasting ATSC (digital HDTV).

3D doesn’t work for everyone. Some people get headaches wearing 3D glasses and unfortunately watching 3D is an all-or-nothing experience (unless you have 3D to 2D glasses). Others wear glasses that just don’t fit will with another layer on top.

3D doesn’t add to the watching experience of all genres. Remember how much more we saw when our eyes first glimpsed HDTV? We saw more players on the screen, the disheveled Floridian misfits on Cops a little clearer, pores and dimples of Danny Trejo, flakey butter infused toppings of Paula Deen’s pastry creations, and of course Planet Earth blew us all away. We realized the benefits immediately and can never go back. Is anyone clamoring for NBC’s Community to be in 3D? How about being able to see Jeopardy contestants pound the buzzer a little closer?

One of 3D’s biggest advocates was ESPN, who caters to sports fans all over. After all, watching games in high definition was a key draw for people to upgrade their sets. It gave people a chance to get closer to the game without having to pay the exorbitant prices of a ticket. The depth of another dimension was supposed to give fans another reason to invest in a new TV. It turns out there is little demand for fans to see the dripping sweat of Chris Paul or a spiraling football thrown by Peyton Manning.

It seems the next step of ESPN’s evolution should be moving towards 4K coverage. With the Microsoft Xbox One and Sony Playstation 4 invading homes later this year, content providers have some assurance their streams have player support but whether these consoles will be hooked up to 4K displays and how soon remains unknown.

Source: TVNewsCheck via The Verge