END_OF_DOCUMENT_TOKEN_TO_BE_REPLACED

Captain America: The Winter Soldier is the sequel to Captain America: The First Avenger. Much like Thor: The Dark World, this film directly follows events that took place in The Avengers, more fondly referred to as the “Battle of New York.” Cap is still getting used to the modern world and how he fits in it. We throw in S.H.I.E.L.D., some covert plotting, and sprinkle in some action, that’s what we have here.

The good; we get the same cast back. That’s always a pleasure because it’s the same world, it’s consistent with what we’ve seen, makes it more believable.

The action is great in this movie. We really get to see Cap move and fight in ways that we’ve only really seen in the comics and the animated tv shows. They perfected Cap’s movements from The Avengers, he leaps, jumps and throws his shield more and more like he does in the comic books.

Speaking more to the action, they utilized a lot of practical stunts, I really appreciate that. The combination of CG and practicals worked really well in this film. I know the shield is computer generated at times, but how else would they have done it? Very good job with how the shield behaves. There’s also a car chase scene with Nick Fury that was previewed on tv, but the entirety of the scene is great. His vehicle is a SHIELD vehicle and has all the gadgets and gizmos that would make James Bond jealous.

And this film is a direct sequel to the first movie, without ignoring The Avengers, I wasn’t expecting it to be as much of a sequel as it was, bravo for that.

Oh and this is definitely the comic book fan boy in me, but we get to see Cap’s ears with his mask. That’s just how it’s been in the comics, with the first movie they were covered and I couldn’t put my finger on what bugged me, but it was the ears. We see his EARS! Hahaha. In line with the comics, the way they dealt with The Falcon was great. I was worried when they first announced that he would be in this film, but they updated him to fit the Marvel Cinematic Universe.

The bad; this is just me being nitpicky, but it feels too soon to see Steve Rogers in the Commander Rogers outfit. But at the same time, I’m glad that we got to see him in the original costume too, but his ears are covered… hahaha

The action, I know I mentioned this above, but it was too hand held at times. Why have all these practical stunts and not see everything? They worked hard and I want to see the stunts.

Oh, and people… people really make it hard to enjoy a movie in the theatres these days. With the assigned seating and higher price point you’d think it would eliminate some of the riff raff… but that time period has gone, back in full force is the lack of common courtesy.

Overall I enjoyed it. So did everyone else, it made $96.2 million this weekend.
We get a very solid action movie with an evil plot to take over the world thrown in there. The way the Captain America movies have been are great, it reminds me of Superman. How Cap is a product of his time but yet relevant in the present, DC Comics should take a page (pun intended) from how Marvel has treated Captain America in their films. You can take a character has “old world” values and still make him interesting.
Captain America is one of my favorite Marvel superheroes, it’s probably all that patriotism drilled in to me as a kid, and I’m glad that we’re getting these movies. 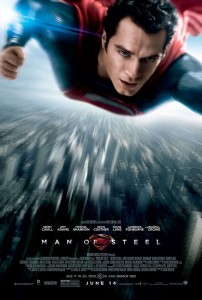 Just saw Man of Steel, it’s Warner Brothers/DC Comics trying to revive the Superman film franchise again.  This time we have Zack Snyder directing with Christopher Nolan at the helm/producer, Henry Cavill as the titular character, Amy Adams as Lois Lane and so on.  It’s a Superman movie, Superman does super things against evil and injustice, this case, the already alien looking Michael Shannon as General Zod.

The good; unlike comic book movies, a lot of the movie the hero is spent in civilian clothing as his alter ego/normal self.  Henry Cavill spends a good ninety percent of the movie in the Superman uniform.  That’s what we’ve been missing in these latest superhero movies, not enough of the hero in costume (Iron Man 3, The Dark Knight Rises…).

After Superman Returns, we finally get Superman returning to the big screen.  Superman punches, flies and punches while flying, action and explosions galore, why did it take so long to get here?!

Henry Cavill as Superman – this guy gets it.

The story, without spoilers, is great, it matches to visuals and it just as strong, they compliment each other beautifully.

The bad; I have to put something here… let’s see… let’s see.  Superman’s costume is too dark, I really do miss the red trunks, Lois isn’t dark haired…

But in all seriousness the action scenes are rather lack luster, it’s nothing new, which is maybe what they’re going for?  But I wanted better coverage and choreography in the fight scenes.  Too many close ups and shakey cam, it’s something modern cinema suffers too much from.

Hans Zimmer’s scores, I know I put this above, but I’m of the school that superheroes should have a catchy theme.  We all can hum the John Williams Superman theme, and the Danny Elfman Batman theme, and let’s not forget the Spider-Man cartoon theme or the nana-nana-nana- Batmannnnn theme.  So what’s Christian Bale’s Batman theme?  “wrrrrrrrooooooooooooommm.”  Listen to the themes of today, can you hum them?

Overall – go see this movie in the theatre, I really really enjoyed this, and this is coming from me, a die hard Superman fan.  When I saw the first trailer I was doubtful, but then that third trailer came out, and I was sold.  From the get-go I wanted to be wrong, and I’m glad that I was… Man of Steel delivers in every way possible. 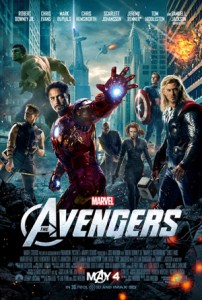 Like most anyone out there, I saw The Avengers this weekend. It’s about the superheroes in the previous Marvel movies coming together to save the world… go see this movie.

The good; go see this movie.

Overall, it’s unlike any of the previous Marvel movies, it’s not overly sad or angsty, there’s a LOT of humor in it, exactly like a comic book.  Oh and go see this movie.

And stay all the way through the credits, as you should always do.

There’s nothing else in this review, go to where tickets are bought and sold for seats in a large dark room and feast on The Avengers!