It’s been a pretty long time. I finally returned to Comikaze to talk with cosplay fans at the 2014 Comikaze Expo. If I had to sum up trending costumes, I’d say Marvel has really figured out how put obscure characters in the spotlight. I saw MANY people dressed up as characters from Guardians of the Galaxy. I probably should have talked with some…

00:39 I’ve never been more creeped out/impressed with a take on Bram Stoker’s Dracula than this. Check out her work here.

01:44 Wall-E and Eve wander the halls gather attention from many. It’s very impressive how Eve floats right next to him.

02:22 Aang is really a Jimmy John’s delivery guy from Wyoming. Who would have guessed?

03:37 El Chapulín Colorado is not very well known. That’s because he’s from Mexico. He’s a clumsy hero with a hammer

04:14 Uncle Fester is a regular at the conventions and I finally spoke to him about how he transformed into the lovable oddity. He assured me that he’s carrying real fat and actually more scary without the makeup.

06:03 Radioactive man is an original creation that shines bright. He works with electronics so the costume probably was a cinch to make.

07:38 It’s a guy with a small body or a puppet with a large head. This is a pretty fun costume and the guy pulls it off well. Check out his work at lincolnworld.com.

09:00 Zapp Brannigan and Leela tell us about their love for Futurama and energy efficiency. 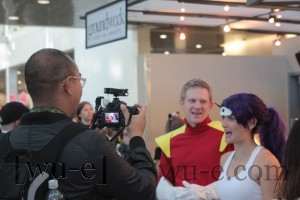 11:44 a very impressive Slender Man cosplayer strides across the halls on tall stilts

11:52 Smoke (Mortal Kombat) loves every single Mortal Kombat and plays Diablo and hopes to get Dragon Age Inquisition. She shares her thoughts on gamergate. Oh yeah. She’s also vegan. Check her out on Facebook

14:05 Raiden was probably one of my favorite cosplay fans. It’s probably because I just like led lights. His hard work of constructing the outfit for 3 months definitely paid off. We get his thoughts on the future of Mortal Kombat on the big screen. When he’s not Raiden, he’s a longshoreman.

16:03 I’ve always heard how crazy Game of Thrones. I’ve only watched the first episode and was pretty shocked at not just the nudity but very carnal nature of the show. It seemed that I would find very young fans getting into the spirit of some characters from one of TV’s grittiest shows. I asked about the dragon and it turns out to be a creation of one’s mother who’s a big fan of the show.

18:38 Harley Quinn loves being fun and awesome while carrying a bat around. If there was another Batman movie with Harley Quinn, she’d want Sarah Michelle Gellar to play her because she loves Buffy. She’s a musical theater dancer that dreams of being on Broadway.

21:07 These two girls do Anna and Elsa from Frozen so naturally because they’re sisters! One is in marketing and one is a scientist.

22:52 I bumped into the Chicano Joker/Harley Quinn represent the Mexicans of Southern California. 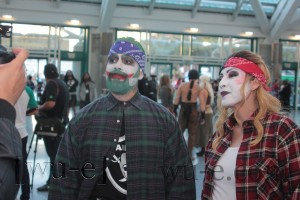 24:14 I probably sound like the biggest ignoramus when it comes to Lord of the Rings. How crazy is the facial hair on Fili and Kili. They agree with me on the franchise being stretched out a bit thin. They’re no stranger to the cosplay scene.

28:00 Hellboy loves men with giant fists and wants to be a game artist.

30:26 Mystique is a model that’s been in makeup since 9am. This is her first Comikaze and she’s very impressed with the large robotic cosplayers. Check out EI School of Professional Makeup if you’re seriously into makeup.

33:40 A weeping angel from Dr. Who can send you back in time and tells us who her favorite Dr. Who is. She took a month and a half to make her costume. She wants to be a homicide detective.