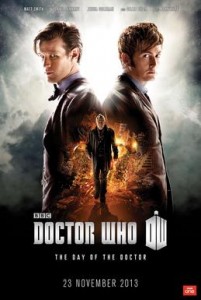 Doctor Who is the longest running sci fi show in history.  It first went on the air in November 23, 1963, a year before Star Trek hit the airwaves.

This year celebrates its 50th anniversary, and below are some videos of how that celebration will be… well, celebrated.

Not only will the special be broadcasted on television, but it’ll be in theatres and then released on DVD two weeks after.

We get to see the current Doctor, Smith, join forces with the fan favorite 10th Doctor, Tennant.  Fun will certainly be had by all.

I have a couple thoughts as to what this special will be about, but they might be spoilers.

Earlier this year, we gave you guys an intimate look at cosplay fans of the Los Angeles Anime Expo. Well, I hope you didn’t think we’d leave you hanging with the Long Beach Comic Convention, because we did it again!

Have a look and discover what cosplay fans are all about as we ask them questions like what makes the Long Beach Comic Convention different from others, why they love the characters they cosplay, how long their customes took to make, why DC Comics doesn’t release as many movies as Marvel, and what they do for a living. Notice how popular steampunk costumes have become?